WAY TOO MANY BANDS! 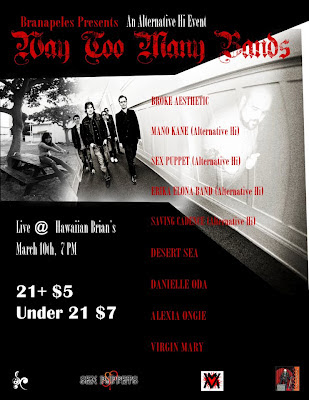 So this upcoming Saturday should be a pretty fun night if you are heading down to Hawaiian Brians.  Brandonapeles features Way Too Many Bands starts off at 7pm and will going all the way into the wee hours of the morning.  This is going to be a pretty intense show for me personally since I will be playing in three bands that night : Sex Puppet, the Erika Elona Band, and Broke Aesthetic.  It really hit me this weekend with the three practices within 2 days.  I must say I wouldn't have it any other way, been way too much fun.

Sex Puppet:  Sex Puppet has gone on a pretty long hiatus at this point but intends to makes its return a huge one.  Practicing some new tunes and reinventing the old ones, Sex Puppet is proud to announce drummer Stephen Lynch (more commonly known as Lock) joining the crew.  Sex Puppet will be closing the night with a heavy, sultry, psychedelic rock tone.

Erika Elona Band: We got together this past Sunday at Soul Sound Studios to get a practice in of the old stuff and a couple new songs as well.  The Intire Project was also in the house and senor Bran decided we shoot a cover video of Fans by Kings of Leon with Tyler's sweet camera.  Klin Reece set up his lap steel and Tyler set up his banjo and on the fly we did the shoot (thanks to Drew).  Here's a link the vid.
Also starting later this month we go in the studio the work on Erika's full album at Soul Sound Studios.  So expect some magic coming to you soon.

Broke Aesthetic: Working and writing.  It really has been so awesome of an experience jamming with Mike and Max.  We really have been cranking out these new songs every single practice and I can say that we really have found a tight groove.  We will be doing an almost all original set written by the three of us these past two months. Big plans are in store for us this upcoming year.  We hope you will be there to share it with us.


The night will also feature Mano Kane (check out the article by Sabrina in the Pulse), Saving Cadence (CD release right around the corner), and Alternative HI musician Kevin Jones with Desert Sea.