This past Saturday was the first attempt to break the World Record for largest ukulele ensemble.  Held at the Waikiki Shell, visitors and locals alike came down to support the cause and take the title away from the current record holder Sweden.  Sweden holds the record at a little over 1,500 people. 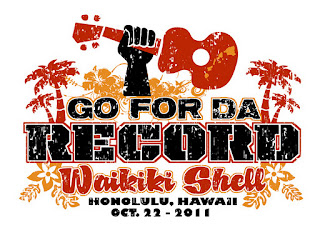 When the doors opened at 10am people were already lining up to show support and be counted in this world record event.  Ukulele Hale had an instructional booth set up towards the back of the amphitheater teaching the "1, 2, 3 Song," by Jake Shimabukuro.   After Jake gave a small demonstration of the song and played a couple of tunes for the audience.  The crowd was then counted and then officially began and played the song.  Unfortunately the count was just a little over a 1,000 people. 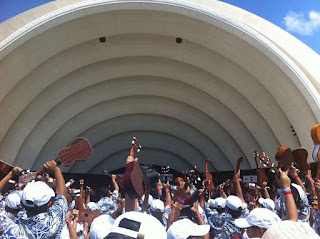 The event was not in vane.  Main promoter Leo Daquioag said that they would give a hana hou for the event in the future.  Though it may not have been a new world record it definitely was a new one for Hawaii.  Being in part a benefit for Rainbow For Japan Kids (setting up relief for the children victims of the recent tsunami), I am sure people would be more than happy to donate and give the record another go!

For more information and updates about the hana hou go to http://gofordarecord.org/
Posted by Neal at 5:26 PM