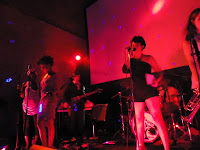 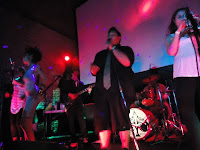 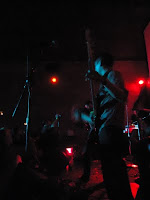 For those of us who didn't get the chance or potentially didn't get in to the Amy Winehouse tribute show this past Friday the 26th you really did miss out. The show was packed with people waiting in front for even re-entry. Honestly one of the sweet line ups of soul singers here on Oahu that I have ever seen. The Bentos opened up the night with their killer groovy vibe and if I had even left at that point I would have been satisfied. Then continued the line up of tribute singers playing all of Amy Winhouse's best songs. Backing was an amazing line up including Jesse Savio and Max Benoit (pictured) from Kings of Spade and Mark Lindberg from the Bentos. Here is a pic of the Big Mox continuing his groove with his own special flavor. Also here we have Yoza who I thought killed it with her distinct raspy deep vocals. Finishing the night was none other than Hawaii's favorite Kings of Spade. They kept the show going all the way to the end of the night! I never can stand still with them on stage! Congratulations to all the acts and singers that threw down. You guys are the reason the scene here stays alive.

For more pictures and other coverage click here (Courtesy of Dallas Nagata).

There is good music right here in your backyard Hawaii! Let's rep it!