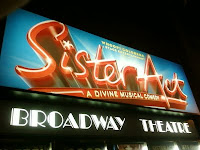 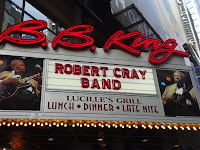 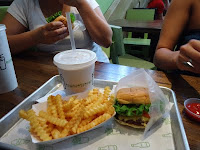 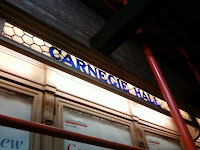 So upon arriving at 1am and then going out to get sleepy, we lost half a day on day 1. Fortunately we jumped on a subway and went down to this chain called the Shake Shack. Like this was just a plain good burger, minus all the fancy toppings and distracting flavors. Definitely a must try if ever encountered.

After it was straight to the MET (Metropolitan Museum of Art). I have to say it was a breath taking experience. The only trouble was I didn't have nearly enough time to digest all the pieces I wanted to see. I distinctively remember going into this room completely surrounded by a whole bunch of work by Degas. I assume it was pact due to the season but, the moment I walked in this room it was empty. I felt everything go silent and just could hear the sounds of the pieces on the wall. Maybe sounds strange. Maybe just pure bewilderment. But I was completely drawn into that moment.

Next came the BB King night club in Times Square. Robert Cray was in town so it was a must see. The club itself is chill,a little touristy but set aside the gimmicky nature it was a sweet set up. Robert Cray was a beast. His tone and style is that sweet fender slap like Albert King. His tone next to his line up made the whole night worth it. Just an honor to be in his presence.

Concluded the night with an impromptu house party with some jazz cats playing bari sax and this awesome archtop. Rounded out very nicely.


Day 2
Highlights would include walking around town and seeing my first Broadway show: Sister Act! I generally speaking don't care for musicals but I am for sure hooked now. Just a mixture of the music and how everything about the show was tight: entrance, instruments, acting, singing, dancing, and even wrapping up the show was down seemingly flawless. Looking forward to the next one later this week!
We went and grabbed a bite to eat at Carnegie Deli. I wish I had the patience to take a photo of the ruben but. . .man it was just toooooooo good. I understand this whole deli thing. . .got to go try Katz next.
Also walked passed Carnegie Hall and I got chicken skin. Something about being so close just gave me this wild and weird inspiration to play more music. It left me on a good note to end the night. Finding that inspiration is one of the reasons that drew me here. Yet to find what else this city has in store.
Posted by Neal at 7:40 PM